Today marks a milestone for Jamaica.  No, not Usain Bolt’s retirement run; that was yesterday. And, no, not Elaine Thompson’s fifth place run in the 100 meter event; that was upsetting. Today, August 6, marks a significant milestone as it is Jamaica’s fifty-fifth year of independence.  But what does Jamaican independence mean?  Just look at what the Jamaica Information Service says about independence:

Jamaica becoming an Independent Nation, now meant that Britain, no longer controlled the affairs of the country. […] Every year on August 6, (previously first Monday in August), Jamaicans celebrate the removal of our dependence on Britain, to control specific functions of the country. At this time we also honour all those persons who were responsible for the transfer of power.

Independence from Britain meant that Britain no longer controlled “specific functions of the country.”  What a strange and vague description, no? Independence is a a time when Jamaica celebrates those who were “responsible for the transfer of power.”  Goodness, isn’t that yet another interesting use of vague language?  It seems to invite fill-in-the-blanks responses from political critics as one could readily insert the United States, the World Bank, the IMF, and/or tourist dollars as the recipients of the 1962 power transfer. But, I digress.

Today is a milestone for Jamaica.  Today marks fifty-five years of independence.  If Jamaica were a working citizen paying into the National Insurance Scheme, she would still have another ten years before she could retire and access her pension or Old Age Benefit.  Presumably, Jamaica would embrace year fifty-five as a year for critical planning. Jamaica would use these next ten years to gain control of all finances and pay-off all debts. Jamaica would use the next ten years to carefully manage all investments and savings so that even if there are unforeseen obstacles, the future is safe and secure. Jamaica would assess her health and healthcare options so that she can not only survive but thrive in her golden years.  Jamaica would, ideally by now, own her home and should take this time to fortify its infrastructure so that it lasts for many years to come. This is what Jamaica would and should do if she were a citizen.  But she is not a citizen, Jamaica is a nation.

How does this nation prepare to move forward?  In my estimation, the first step to forwarding is to stop reversing. 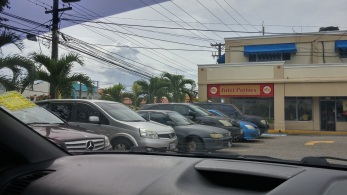 What I am saying is not new. In 1978 Jacob Miller, the gone-too-soon young reggae singer, sang out with love “forward ever, a backward never” yet wherever you go in Jamaica you see signs of backwardness. The reverse entry parking pictures above showcase my point. It is hard for me to calmly express the misfortune I feel when I enter a car park behind a driver determined to reverse into a space. I want to scream out, “Why can’t you just go forward into the space?!” But no, I either have to sit and wait for the driver to do a three-point turn into the space or I have to reverse to give the driver more space to do a five-plus-point turn.  The parking lot’s driving lane fills with motorists who must all wait to accommodate these backwards moves. All progress is thwarted.  We are all stalled. We all wait.  Everyone around me seems un-bothered by this method. Sometimes a car park security guard appears to “assist” the backwards parker.  Hand gestures usher the reversing motorist into a space and more hand gestures signal waiting drivers to be patient. I understand the logic of reverse parking (avoiding blind spots, not changing the direction of traffic, better sight for the driver), but the inherent caution associated with reverse parking and the immobilizing traffic jam that ensues, underscore my point: Jamaica, we can and should go boldly forward into spaces.

Barring the nation’s innovative musical history, Jamaica has been regressively cautious when it comes to moving forward.  Clothing and dress code rules are often cautiously backwards. Rules regarding how one styles his/her hair in public are anti-progressive. Anti-buggery laws are backwards.  Indeed the way that Jamaica polices the bodies of its citizens forwards a very backwards agenda that is steeped in colonialism and its mores. With more than a half-century of granted independence, Jamaica is not yet breaking from the traditions left by the British and Jamaica is still showing a preference for reversing.  When will the day come when Jamaica relies less on colonial tradition and more on the potentiality of forward innovation?  Wouldn’t that bring practical meaning to Jacob Miller’s words?

Rain clouds began gathering after Usain Bolt finished his 100 meter race yesterday. Heavy rains started to fall yesterday evening and all through the night into today.   Some Independence Day events have been delayed but the Grand Gala event at National Stadium is proceeding as scheduled.  With Elaine Thompson’s 100 meter upset, the rains returned.  Much of Jamaica is wet; but Jamaica is not drowned.  We celebrate fifty-five years of independence today.   Bolt is set to retire from track competitions following his 4 x 100 meter race on Saturday, August 12.  Upon retirement he will be thirty years old.  Forbes estimates Bolt’s net worth at US$34M. Jamaica is fifty-five today.  Jamaica is not eligible for retirement for at least another ten years and Jamaica has an external debt of US$16.76B (according to December 2016 figures).  I do believe Jamaica has many a good race left to run.  But, critically, Jamaica has some careful work to take care of before retirement time comes.  Jamaica needs to invest in forward-thinking sustainability and infrastructure.  Jamaica needs to invest in its women and its young people.  Jamaica needs to support its scholars and artists and advocate for creative innovation that pushes beyond the boundaries of music.  Jamaica needs to protect its environment and define its brand if she wants to have a comfortable future of independence.  Let Jamaica start by heeding Jacob Miller: “forward ever, a backward never.”