From negro, to nigger, to black, to enslaved property — but still negro. To Other, to colored, back to black, to African-American, to nigga, to African American without a hyphen, and now still a nigger– but with a capital “B” in Black.  These shady words and terms have been used since the 18th century to identify those of us who are non-white, non-Asian, non-Hispanic, and non-indigenous in what has been since 1776, the United States of America.  To put it bluntly, to be African or a descendant of Africans has always, in the American and European colonial imaginary, meant being less than.

This kind of conscious and subconscious social conditioning is what led Marcus Garvey to speak those famous rallying words to his fellow Black people in 1938: “We are going to emancipate ourselves from mental slavery because whilst others might free the body, none but ourselves can free the mind.”  And the persistence of this kind of conscious and subconscious social conditioning throughout the African diaspora influenced the beliefs of Rastafari, led Burning Spear to create the album Marcus Garvey (1975), and led Bob Marley to “reggae-fy” (if I may use scholar-writer-poet Kwame Dawes’ term) Garvey’s pan-African worldview on the song  “Redemption Song” (1980). But, this post is not about music. This post is about a new story that is told to us through visuals.

Visually, Eddie Murphy’s 1988 film Coming to America offered a critical new image for America’s African descendants to visualize during the long, arduous process of freeing oneself from the mental slavery that has for centuries limited how Africa has been understood or imagined. So, yes, I am arguing that Coming to America was critical in helping Black America confront its (mis)understanding of Africa while also allowing Black America to imagine a new story about Africa.

Re-imagining Africa through Zamunda, the fictional nation ruled by James Earl Jones’ kingly character in Coming to America, gave Black people in the diaspora a different story out of Africa. Of course, this fictional kingdom was not perfect by any means, but it did disrupt prior imaginings of the continent through its depictions of an Africa that was not hungry, was not diseased, was not poor, and was not war-torn.  In the African Kingdom of Zamunda, Africans were healthy, fertile, and rich with gold and cash.

From the movie Coming to America (source hark.com)

These images helped to contrast the dominant images offered in cartoons, literature, magazines, and the news media. Take for example the visual power of a fictional Africa that the mind constructs when reading Edgar Rice Burroughs’ Tarzan series (written between 1912-1965). This image has lingered into the present day. Consider the visual impact of Jane Goodall’s Africa, the continent where she worked tirelessly to study and save chimpanzees remains today, as many continue to think of Africa as a land of animals more than people.  And one has to recognize the power printed in the pages of the National Geographic Magazine, where since 1888 photographers have captured and constructed Africa for so many thousands of households throughout the Americas and the world.

Through images, a particular view of an animal-Africa, backwards-Africa, primitive-African-Africa has been created. Zebras, acacia trees, lions, loin cloths, dark skin and bare breasts. Distended bellies, warlords, possessed dictators, malaria, ebola, and brutal female circumcision.  And for the descendants of Africa, the image of the African in America is equally stereotyped and limited. Senseless gun violence and drug-dealing in the ghetto.  Angry baby-mamas and high school drop-outs.  Hidden historical figures in America’s space program and America’s White House.  Tyler Perry’s brand of American blackness.  Oprah as America’s mammy.  Orenthal J. Simpson as O.J. Simpson.  Trayvon Martin, Eric Garner, and Charleena Lyles as Black threats to white America. And Beyoncé as Beyoncé.   If we think about it, this was American popular culture’s representation of Blackness prior to the release of Black Panther on February 15, 2018.  But what is Africa to Black America now?

With Black Panther what it means to be Black or African is shifting from and being redefined by the diversity of the film’s lead actors: Chadwick Boseman (Black Panther/ T’Challa), Danai Gurira (Okoye, the General), Lupita Nyong’o (Nakia), Michael B. Jordan (Killmonger), Winston Duke (M’Baku), and Letitia Wright (Shuri).  This cast that hails from the U.S., Kenya/Mexico, Trinidad and Tobago, and Guyana, and plays characters with deep, reflective interiority to complement their physical strength, represents a new story of Afro-futurism.

Black Panther offers a new story about how we have held on to Africa as a past, rather than as a future.  Just read the image below of Killmonger looking at African artifacts in the British Museum. Isn’t this how Africa has remained — locked up, conditioned, and curated by Europeans–  for so many of us living outside of Africa?

Mid-twentieth century American Civil Rights and equal rights protests and legislation, and 1970s dashikis and afro hair-dos did only part of the job of re-writing how the West understood or imagined Africa or what it means to be Black people.  I was a little kid when I saw Eddie Murphy’s Coming to America on television. But even as a young girl, the visual affect of that movie helped to widened my imaginative scope with vivid images of a rich, contemporary African kingdom.

Two weeks ago I saw Black Panther in Jamaica, in Kingston, in Liguanea. It was the Sunday of opening weekend and there were patrons ranging from babies to seniors. Some movie-goers wore clothing inspired by Afrobeat music videos, while others dressed in full black.  There was an infectious excitement in the theater and, as the movie got underway, it did not disappoint.  With Black Panther being released in the digital and global age of communication, this time of increased access to the continent, and Instagram, it would be utterly backwards for American popular culture to ever again put forth a primitive, implosive imagining of Africa. A new story has begun. 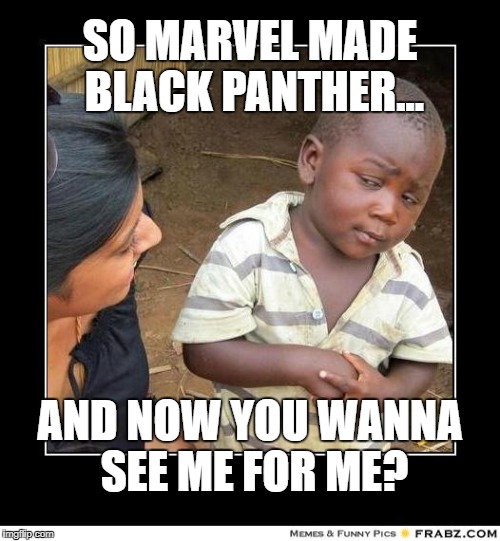 For additional reading on the film consider these articles: